As is well known, the coronavirus pandemic is affecting the global agenda in both public health and socio-economic terms. Faced with this unexpected and unprecedented reality, governments are implementing different policies according to the intensity with which this disease is developing in their respective countries.

From the economic point of view, there is a tendency to favour the injection of money through the actions of the Central Banks to mitigate the recession that the reduction or paralysis of economic activities entails, and the application of government subsidies for those activities or social sectors most affected.

Since tax policy is a section of economic policy, it could theoretically be assumed that the policy makers would respond logically to the reduction of the tax burden or the postponement of tax payments in the face of the liquidity problems that the decline in economic activity will cause.

Currently in the U.S. the issue is engaged in a heated debate between Democrats and Republicans as to what incentives should be applied to face the recession that this pandemic would bring. Thus the Democrats emphasize the implementation of paid sick leave, food subsidies, extension of unemployment insurance, etc., while the Republicans emphasize the reduction of social security contributions by companies.

Apart from this ideological conflict, the Internal Revenue Service (IRS) would also refrain from charging interest or other penalties to those who fail to meet the deadline for paying income tax. The deadline is usually April 15, but the possibility of postponing it is being considered for some personal taxpayers and even for some companies, according to the announcement given by Treasury Secretary Steven Mnuchin.

The following summary table shows the initial international tax reactions on the subject: 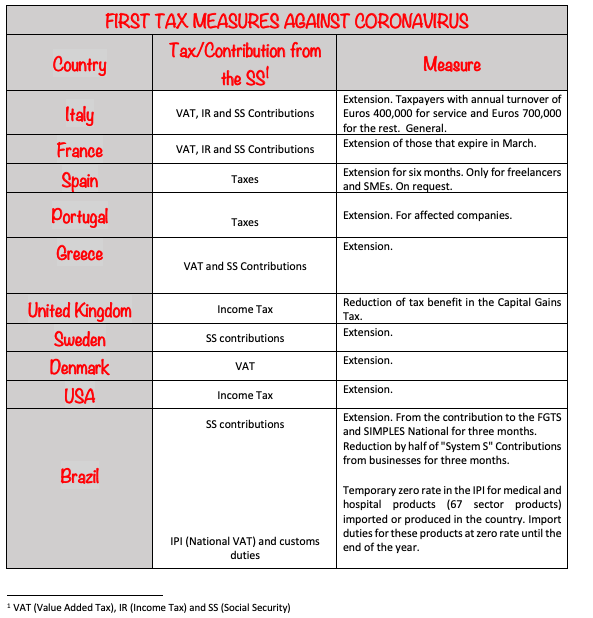 It is clear that these are the first measures, and more are expected as the pandemic spreads, and they will vary according to the intensity of each country.

But it can be inferred that the clear trend at this early stage is to extend the due dates of both taxes and social security contributions. With the logical variations in each country, thus in some countries they cover all taxes (IR, VAT), in others only one of them, while in others they cover SS contributions jointly or separately.

The petitions of the business chambers have also been unified in requesting the reduction or exemption of taxes and social security contributions in view of the seriousness of the economic situation.

It is logical for governments to be cautious in taking measures, taking into account the budgetary balance, in terms of the injection of liquidity by the Central Banks, subsidies and aid with the consequent public outlays, in addition to the fall in revenue due to the decrease in economic activity, which takes away the margin of action to exempt or reduce taxes or contributions from their systems.

So far only the UK has decreased a tax revenue. Through the decrease of a tax benefit in the Capital Gains Tax, to the shareholders of companies in the sale of shares, as it established a cap (decreased) to that tax advantage.

However, it should be noted that although this was announced as part of a package of measures in conjunction with the impact of the coronavirus, many analysts maintain that it was a measure already studied and that it was going to be applied with the brexit, but it was delayed in its implementation, so -beyond the announcements-, it should not be considered a true anti-coronavirus measure.

Brazil has just announced a more aggressive tax plan. Firstly, the extension by three months of the companies’ social security contributions to the FGTS (Guarantee Fund for Time of Service) and the Simples Nacional, as well as the reduction by three months of the companies’ contributions to the “S System”. Secondly, it provided for the reduction to zero of import tariffs and IPI (Tax on Industrialized Products) for 67 goods for medical and hospital purposes, in order to lessen the impact of the price increase that they had due to their high demand for treating the virus and its consequences on health.

On the other hand, tax analysts also consider that the drop in revenue due to the decrease in economic activity must be compensated by the increase in certain taxes. No country has yet made progress in this direction, but theoretically there would be little room for it, but if it were, it would possibly be on luxury consumption or property taxes affecting people with high tax capacity.

In conclusion, it can be argued that tax policy makers will have a major challenge to meet in the coming months as the crisis deepens, as everything indicates today.

There will be ideological differences in which instruments to apply, but the reality as always will prevail, and I think that measures that would not normally have been adopted will have a favourable field for their application.

A happy customer is a good customer

Taxpayers' rights and guarantees in relation to the exchange of…

With financial support from GIZ, CIAT alongside renowned experts have…

The pale king and the tax administrations

Taxpayers' rights and guarantees in relation to the exchange…

ICT as a Strategic Tool to Leapfrog the Efficiency of…